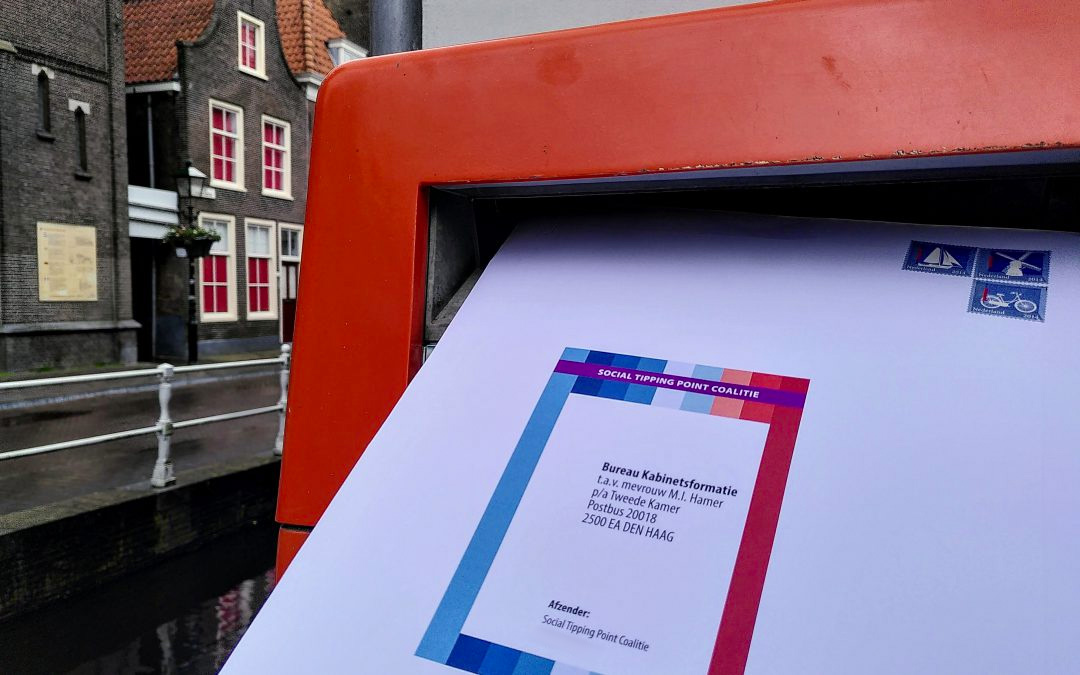 The new Dutch cabinet must aim for rapid social change to achieve the Paris goals, including measures to phase out fossil fuels so that there is more room for sustainable solutions. That is what the Social Tipping Point Coalition writes to the informateur Mariëtte Hamer today. Initiator Femke Sleegers: “We are in a hurry to prevent uncontrollable climate disruption. The ideas and initiatives in society are already there. The new cabinet must now take concrete measures to accelerate them.” Within a week, 58 organizations and 87 scientists, artists and other prominent people signed the letter.

In the letter, which was signed by climate professor Pier Vellinga, journalist Twan Huys and writer/actor Ramsey Nasr, among others, and organizations such as Urgenda, DRIFT, Fossielvrij NL and Youth for Climate, the group calls on the new cabinet to accelerate climate policy with a strategy that provokes social tipping points. The letter quotes scientists who compare the climate crisis to the Titanic disaster. The captain had 1 minute to avert the disaster. After that minute, everything he tried was in vain, because – no matter how hard he would hang on to the helm – the ship would not turn in time. “That is the situation we are in now with climate change. We have to steer now,” Sleegers said. “And not wait for technology that only reduces emissions in ten or twenty years.”

The group calls social tipping points a lifeline. These are rapid social and economic changes which, through a chain reaction, rapidly and significantly reduce greenhouse gas emissions, causing technologies, behaviors and social norms to spread through society at an increasingly rapid rate. Five examples of measures that can trigger a social tipping point are stopping subsidies to the fossil industry, requiring pension funds and banks to exclude fossil companies from their investment portfolios, banning fossil fuel advertising, climate education and decentralization of the energy system. The measures reinforce each other, require hardly any investment and can be deployed in a very short period of time.

The signatories invite the new cabinet to work together on a strategy for societal acceleration. “Citizen movements and progressive forces from civil society are a vital part of achieving the Paris goal.” Sleegers cites President Biden as an example: “After talks with the Sunrise Movement, Biden is now weeding out fossil industry lobbying, stopping fossil infrastructure, wanting to eliminate fossil subsidies and investing that money to help citizens, businesses and organizations become more sustainable.”

Read the Letter and the Supplement

Some signatories on the Social Tipping Point Strategy

“The corona crisis has made it clear to many people that a healthy living environment should be priority number one. The government should use such momentum to phase out all that is unhealthy, starting with all the things that keep fossil fuel too cheap and attractive. The Social Tipping Point Strategy provides a framework for this and can move the Netherlands to a social tipping point.”

“As long as our political leaders continue to downplay the climate crisis and fail to act on it sufficiently, citizens will never get a sense of urgency. To accelerate climate policy, the government must acknowledge the climate emergency, show moral leadership and take decisive action. It must develop a value-driven vision and strategy that also harnesses the power of society to achieve Paris. In short: it is time for a Social Tipping Point Strategy.”

“Artists, writers, musicians and actors support this call for a Social Tipping Point Strategy. We understand the art of touching people. To take them along in our stories. And to activate them. We like to help build a social tipping point by raising awareness and changing norms in society.”

Sieger Sloot, actor and co-initiator of Artists and Creatives against fossil fuel ads

“The new cabinet should make tackling the climate crisis the top priority and start phasing out fossil fuels immediately. There is a great opportunity to accelerate the transition with this Social Tipping Point strategy and the initiatives of this new coalition. The government can turn words into action by denying the fossil industry access to free money and their privileged influence through lobbying and advertising.”

“We are at a crucial time in the fight against climate disruption. We have no more time to lose to meet the Paris climate goals. There is no place for advertisements that keep fossil fuels and the fossil fuel industry normal and that actually worsen climate change.”

“The climate crisis cannot be solved overnight, but good climate education is an essential part of that solution. When students are educated about climate (change), they, in turn, talk about it with their parents. In this way, we can also make the major changes needed to counteract the climate crisis discussable at the dinner table.”

“”Young people have the right to know how the climate crisis will determine their future and how they can contribute to a sustainable society. Scholars have an important role as change agents. Not only later when they enter the labor market, but also now. If climate education gets a place in the curriculum, it can cause a social tipping point.”

Wieneke Maris, Teachers for Climate and Sustainable Teacher of the Year 2020

“It is perverse that in the midst of the climate crisis, there is still more state aid going to fossil fuels than to climate policy. In order to start doing something real and free up money for it, fossil fuel subsidies need to be phased out as soon as possible.”

“For almost 10 years we have been making houses energy neutral and calling on the government to train technical people. A social tipping point occurs when citizens can opt for flexible energy prices just like big business. At times when there is a lot of energy available, energy is cheap or even makes money. Great times to do the laundry or charge the car. In this way, we can reach a social tipping point in the decentralized energy transition with a few relatively inexpensive measures.”

“The strength of this ‘5 Social Tipping Points Strategy’ lies in its integral approach. The social tipping point for the built environment lies in a local, cooperative and decentralized energy system in which residents produce, use, store and supply heat and electricity to each other. This requires a heat law that is tailored to this and a fair energy tax that treats large and small consumers equally. Tax breaks for large-scale centralized solutions must be scrapped, as must plans to use fossil residual heat to heat homes.”

“”The science is clear: the production and use of oil, gas and coal must be reduced rapidly in order to stay below 1.5C warming. Countries like Denmark, Costa Rica and Ireland are therefore not granting new licences for oil and gas production. The Netherlands, meanwhile, is doing the opposite. The government has recently increased the subsidies for gas production. The Netherlands could make much better use of the billions of subsidies that now go to polluters. Ending fossil fuel subsidies would make it possible to invest this money in insulation, renewable energy, public transport, care and education – and it would also reduce emissions by 7.7% by 2025. What are we waiting for?”